How Print Advertising can help you Combat Ad Blocking

Every day there are more tools and opportunities for your audience to actively block or ignore your paid ads. Let’s face it, Ad blocking is pretty much everywhere. Some platforms like Facebook even incorporate this type of technology right into the news feed by allowing people to apply settings to their interests or notating content they find offensive or that they no longer want to see.

In the last few years, the emergence of native advertising has been helpful but even that is no longer a novelty. Consumers understand when there is intent to sell and as the old saying goes that people like to buy but do not like to be sold. Currently, reports show that around 30 % of the population uses ad blocking software. This figure is projected to only increase as more and more software becomes available for them to use.

How to combat ad blocking

Thinking creatively with your digital advertising can help, but often not enough. The format of mobile can be very limiting and it can be difficult to create an impressive and without the risk of being invasive on the user’s experience.

With all the challenges that exist there is even more interest in guaranteed view-ability for ads. “The opportunity to do something really creative has been eaten away because you have to go to the lowest common denominator to get scale and that has given rise to horrible banners and intrusive pop-ups,” said Alex Newman, managing director EMEA for mobile at OMD. ( HuffingtonPost )

View-ability is defined as there being at least 50 percent of a display ad’s pixels in view for at least 1 second. This is determined by In-app ad serving that uses built-in triggers that count impressions only when an ad is viewable on the mobile screen. ( WSJ) The Media Ratings Council ( MRC ) recommends the same standards for ad view-ability as on desktop and the goal 100% view-ability standards one day.

The majority of people you will talk to on a daily basis will be small to medium size business owners and entrepreneurs who may have only done self-generated advertising in the past. Millennials and Generation Xers have actively been choosing to start their own businesses than working corporate.

Despite common beliefs, studies show that most people prefer reading in print over digital and interestingly enough people also still show a preference for shopping in Brick and Mortar retail stores where they benefit from touching,  feeling, and trying on the product before they buy.  As more types of advertising enter the market place and the industry becomes more diverse and ultimately more competitive we are still seeing a preference for people to rely on the more traditional forms of advertising. Or at the very least we see many returning to traditional advertising after brief rendezvous with various forms of online and mobile media. 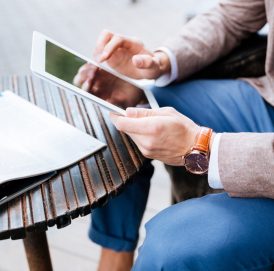 What Types of Advertising do people trust the most?